San Diego Flood Restoration Completes Large Water Damage Project in Four Days Time
Citizens of San Diego enjoy some of the most spectacularly beautiful weather on the entire planet. While other parts of the country deal with periodic hurricanes, frigid temperatures, and the constant threat of flood damage, the San Diego public is granted radiant sunshine and lazy days at the beach. This lulls the public into a state of unreadiness, as the threat of flood damage is relatively low. Unfortunately, a water supply line to a sink in the library at Coronado Middle School recently burst, causing massive flooding and water damage. This institution within the Coronado Unified School District experienced severe flood damage in several key locations, including the library, book vault, staff hall, nurse’s office, and computer server room. This widespread damage would appear to be a devastating blow to the school, but the staff appears to have avoided major chaos by quickly selecting a local flood service company, one that was able to restore order within four days time.

The staff of Coronado Middle School chose San Diego Flood Restoration, a local company for this large commercial water damage project. This strategy is in stark contrast to selecting a larger, global corporation. San Diego Flood Restoration is an organization that specializes in flood, fire, and mold damage, and was able to complete this gargantuan drying process within four days. This massive undertaking was completed in a very short amount of time, as the flood damage project began on Tuesday, March 13th, and was recently completed on Saturday, March 16th. For a local company to completely dry a large building with water damage in several key locations, they must have an aptitude for completing large commercial water damage projects.

San Diego Flood Restoration began in 2007, but their expertise dates two decades, when the owner, Tom Frederick, began a flood damage and carpet cleaning business. They have a track record of satisfied clients who often praise the company’s ability to begin and complete a job with rapid efficiency. San Diego Flood Restoration currently holds a perfect “A” rating with the Better Business Bureau, with zero complaints or issues coming from clients. This type of reputation is nearly impossible to maintain, but Mr. Frederick, a father of two CUSD students, has been able to do so for over five years. While San Diego Flood Restoration primarily deals with residential flood damaged homes, they also have the capacity required to handle commercial projects of mammoth proportions. They have completed many large, local commercial flood damage projects, including the City of Coronado Police Department, Willis Allen Realty in Coronado, and the Coronado Rite Aid Building. San Diego Flood Restoration seems to possess the ability to take on any job that affects the city of San Diego, no matter the scale or scope. 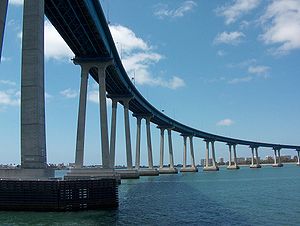 Despite these accomplishments, San Diego Flood Restoration remains primarily focused on getting the job done and being available to their clients. When inquired about the nature of the Coronado Middle School flood damage and subsequent swift recovery effort, Mr. Frederick had praise for everyone that made the endeavor a swift process. Among those specifically commended were head of operations Jim Mazurkiewicz and his entire on-site maintenance staff for not hesitating to begin the water extraction process. The staff of Coronado Middle School also displayed an adept shift in philosophy, selecting a local business with the ability to complete the project rather than a large company which could have cost the school much more. With a large commercial flood recovery effort, a successful operation involves many factors, workers, and community members.

By the time this article is published, the Coronado Middle School will be completely dried and ready to begin normal operations, within four days of the outset of this devastating flood damage project. What initially seemed like a catastrophic blow to the school district will soon be a distant memory, as the restoration efforts have been concise and swift. Here in San Diego, we may have magnificent weather and are not concerned with the threat of flood damage, but these types of destructive events do happen on a regular basis. No one can tell when a burst in a water line can mean widespread destruction and chaos for a large commercial building or small residential home. Luckily for us, San Diego also has many local companies that specialize in serving our many diverse communities. Perhaps nothing is more telling than a message sent from San Diego Flood Restoration to the Coronado School District at the beginning of this water damage project:

“We will work through the entire weekend and evenings… we will work without stop until done.”

San Diego Flood Restoration seems to have delivered on this promise